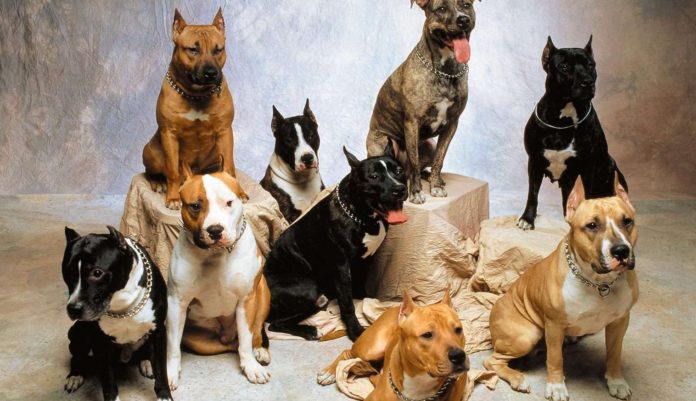 They have locking jaws! Bullets bounce right off them! And other Bunk about Pit Bulls…

MYTH: All Pit Bulls are mean and vicious.

It is reported on temperament tests conducted by the American Temperament Test Society that Pit Bulls had a passing rate of 82% or better – compared to only 77% of the general dog population.

These temperament tests consist of putting a dog through a series of unexpected situations, some involving strangers.

Any signs of unprovoked aggression or panic in these situations result in failure of the test. The achievement of Pit Bulls in this study disproves that they are inherently aggressive to people. (Please visit ATTS.org)

MYTH: A Pit Bull that shows aggression towards an animal will go for people next.

“Many working breeds have antipathy towards other animals – coonhounds go mad at the sight of a raccoon, foxhounds will not hesitate to tear a dog-like fox to shreds, greyhounds live to chase and maul rabbits and even dog-like coyotes. Even the ever-friendly beagle will slaughter a rabbit, given the chance.

And yet the greyhound, coon and foxhound and beagle are among the friendliest of breeds towards humans. And it is the same with the pit bulldog. His work through the years has been control of other animals – never humans. A correct pit bull is more often than not submissive toward all humans, and adores children.

A pit bull that snarls, lunges or growls at non-threatening humans is NOT typical of the breed.” (Written by Diane Jessup)

Pit bulls that do show aggressive behavior towards humans are not typical of the breed and should be humanely euthanized.

MYTH: If a Pit Bull was never trained to fight, it will be safe with other dogs.

A Pit Bull that will fight another dog if unattended is a normal Pit Bull. Even if a Pit Bull does not start the fight, it has the potential to seriously injure or kill a dog once in the fight.

The Pit Bull has been bred to not back down and withstand pain until the goal is met. This quality does not carry true in all Pit Bulls, but it is safe to assume it is a potential in any Pit Bull in order to avoid unnecessary problems.

Pit Bulls have a late maturity, and a Pit Bull that was dog friendly at 7 months old may suddenly show signs of intolerance of unfamiliar dogs around two years old. Spaying and neutering the dog may help to prevent “turning on” the genetic urge to fight another dog.

All dog fights are preventable, however. Socialize a Pit Bull slowly with new dogs, and never let them play unattended. Remove items such as toys and food bowls to avoid stress.

Pit Bulls can live happily with other pets; if not left unattended. Even the “best of friends” can fight, and the outcome may be tragic. This can be true for dogs that have been together for years. Often, after the first serious fight, relations between the dogs are never the same.

Keeping that first fight from happening is a great way to ensure peaceful relations for the long run. If there is a multiple-dog household, it is important to separate the dogs when there is no one home.

Many people use crates for short times, put dogs into separate rooms, use kennels, or have outdoor areas set up for separation that are safe and secure. Pit Bulls can get along wonderfully with animals like cats, rabbits, and ferrets, but for safety’s sake, never leave them alone together.

Dr. Lehr Brisbin of the University of Georgia states, “To the best of our knowledge, there are no published scientific studies that would allow any meaningful comparison to be made of the biting power of various breeds of dogs.

Dr. Brisbin: “The few studies which have been conducted of the structure of the skulls, mandibles and teeth of pit bulls show that, in proportion to their size, their jaw structure and thus its inferred functional morphology, is no different than that of any breed of dog.

There is absolutely no evidence for the existence of any kind of “locking mechanism” unique to the structure of the jaw and/or teeth of the American Pit Bull Terrier.

MYTH: Treadmills are only used to get dogs ready to fight.

Many responsible owners utilize treadmills to help exercise their dogs. This is useful in places where weather prevents outdoor exercise, or in situations where off-leash exercise in not an option.

The treadmill is used by people that show their Pit Bulls, and do sporting activities like weight pull and agility to help keep their dogs in shape. Because Pit Bulls are athletic animals, responsibly using a treadmill can help them be healthier and happier.

This rumor started with the Doberman, and has since been said about game-bred dogs in general. The concept of an animal’s brain swelling or growing too large and somehow causing the animal to “go crazy” is not based in truth in any way.

Their brains grow at the same rate as any other dog, and the only time that a Pit Bull’s brain is going to swell is if it receives a serious injury. If an animal’s brain were to grow too big for its head, the animal would die.

MYTH: It is unsafe to get a Pit Bull from a rescue or shelter because their past/genetics are unknown.

Under the best of circumstances, it is great to know the history of a dog, the history and health of its parents, and what that line of dogs were bred for.

If a person is buying a Pit Bull from a breeder, this information should be of top importance. However, in most shelter/rescue cases this information is not available. The Pit Bull at the shelter will often be a wonderful pet. It is important to know the general behavior of the dog.

It is suggested that a potential adopter of a Pit Bull bring the whole family to meet the dog. Often, shelters and rescues will allow you to take the dog for a home visit to see how they respond to the new surroundings. Most adoptions of a Pit Bull are amazing successes, and the adopter is not only receiving a pet, but they are also saving a life!

MYTH: It is best to get a puppy so that you can make it behave how you want it to.

Many people feel if they get a Pit Bull as a puppy they can train it to not be aggressive towards other dogs and increase the likelihood that the dog will have no undesirable behavior qualities.

Puppies can be a lot of fun and very rewarding, but with a new puppy there is no way of knowing how that dog will act as an adult.

One benefit of adopting a young adult or full grown Pit Bull is the ability to avoid the uncomfortable puppy behavior stage. This includes constant destructive chewing, house breaking, excessive and uncontrollable energy, teething and puppy biting, possible whining, howling, and barking for attention at night, and the time and effort it takes to begin teaching general manners and obedience.

Another benefit is that an adopter can know how an adult Pit Bull will do with other dogs, cats, children, car rides, and other certain situations. Bringing a puppy up in the most loving and social environment can only alter its predetermined genetic urges so much.

In other words, having a dog since puppyhood does not necessarily mean it will have all of the qualities desired in a pet. It may end up having some traits that are undesirable. An adult Pit Bull, however, will have more of an established personality, and an adopter can know what to expect with the dog.