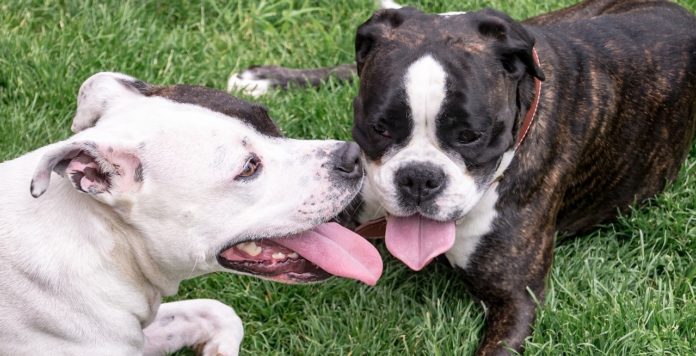 American Staffordshire Terriers – also known as Am Staffs – are a breed of dog that often confuses people – both laymen and experts alike. While many people like to toss it into the pit bull category, in reality, it’s a breed onto its own. Because of this confusion, however, it is a dog that people seem to be very wary about. Which, in my opinion, is just an unwarranted response to these loyal, strong and faithful canine companions.

I have spent quite a bit of time around this dog breed and can attest to their gentle, playful nature and their desire to be integrated into the family unit. Since they are such great dogs, I’ve decided to write this piece to dispel some of the myths surrounding this proud dog. I hope that it will put this breed into a whole new light and dispel some of the fear that may be surrounding these dogs. The American Staffordshire Terrier is a dog breed that was developed during the middle part of the 19th and the beginning part of the 20th centuries. It was based on the Staffordshire Bull Terrier and was originally a small-sized breed of dog. Over time, however, it was bred to be somewhat of a larger dog.

This breed of dog was bred to root out and destroy vermin such as rats and moles, to serve as bird dogs to hunters and for handling various duties on the farms such as corralling and/or driving cattle. This is in stark contrast to the Staffordshire Bull Terrier, a breed that was originally bred to keep bulls in line for butchers and was eventually used in the savage sports of bull baiting and bear baiting before they were outlawed.

In 1972, the American Kennel Club revised the name for this dog breed and finally settled on what it is known by today: the American Staffordshire Terrier. However, this only seemed to add further to all of the confusion surrounding some of these pit bulls. Today, even some pit bull professionals have problems telling the difference between this breed of dog and the American Pit Bull Terrier (APBT). In fact, in many instances, you can have a dog listed as an Am Staff by the AKC and as an APBT by the United Kennel Club (UKC).

Today, the duties of this breed are no longer related to the woods or the farm. Many people have discovered the innate strength and courage of these dogs, as well as the fact that they can be the perfect pets for a family to own as they are often very affectionate towards their people.

American Staffordshire Terriers usually weigh a minimum of 45-pounds and a maximum of 70-pounds. These dogs are about the same height as an APBT but are generally stockier and larger. This breed of dog tends to have a squarer head and body than other pit bulls and have rose shaped ears that lift up and out and then flop forward. However, it’s now quite common for rose ears to be cropped on dogs, so you don’t see as many of these dogs with them as you used to see.

According to the AKC, this breed is usually colored in one of 18 different colors which include black, white, blue, red, seal brown, bronze, liver, fawn, black brindle, blue brindle, blue fawn brindle, brown brindle, red sable, red brindle, blue fawn, fawn brindle, liver brindle and fawn sable. They also come in a variety of different head and body markings which includes black and blue masks, patches, spots, tan points, white masks, white markings and brindle points. Of course, these are only the standards set forth by the AKC and these dogs may come in other colors and other markings. Unlike other breeds often referred to as “pits,” the fighting instinct in the American Staffordshire Terrier has been bred out. They are not considered by experts to be aggressive animals and are in fact, considered to be loyal and faithful guardians of the family. So much so, in fact, that they were often called “nanny dogs” because they were so good around infants and children. However, I do have to emphasize here that no dog, no matter how tame or calm, should even be left unattended with small children.

They are also considered to be natural clowns, doing things simply to entertain themselves or their owners. This quality, along with somewhat of a natural stubborn streak, can make these animals a little more difficult to train than other dogs. Patience and persistence will go a long way in helping train this animal. These animals are very intelligent though, so they can be trained to a very high level.

These dogs really love to play and require quite a lot of exercise to keep them healthy. They are best suited for households that have large fenced-in yards that give them plenty of room to run and play. However, you’ll only want to keep them outside for exercise and play time. They are simply not the type of dog that wants to spend all of their time outside. These animals are very social and want to be around the family unit, so it’s important they are given that opportunity. Like many other types of dogs, if they are left alone all of the time, then they will begin to develop aggression problems. And as is the case with all other dogs, they should never ever be chained for long periods of time.

While these dogs do better than most pit bulls around other dogs, it’s important that some caution is used. If your dog is older, then you may want to avoid bringing it into the home with another dog or adding a new dog to the home. Although Am Staffs are quite tame, they will attack other dogs if they feel that their life is in danger, that their place in the house is being challenged or if another dog attempts to challenge them.

As mentioned earlier, these dogs are intelligent and have very high energy levels, so they are therefore extremely prone to boredom. And when they become bored, they can resort to chewing and other destructive behaviors. This can be remedied by giving them plenty of daily exercises, by spending good quality time with them and by leaving chew toys and rawhide bones around your home for them to chew on.

Two of the main conditions that affect this breed of dog are Hip Dysplasia and Elbow Dysplasia. These conditions cause the joints affected to form improperly – which can lead to pain and eventually arthritis. While these conditions can be caused by poor diet and environmental factors, they usually develop because the dog is genetically predisposed to it. Hip and Elbow Dysplasia can be treated in a number of different ways. It can be treated with surgery, diet and exercise, physical therapy and medications.

Another health condition in which this breed is susceptible to is Canine Atopic Dermatitis. This is a hypersensitivity to substances found in the environment. For example, the dog can have a sudden reaction to mold spores or plant pollen resulting in reoccurring skin problems or problems with the ears or anal glands.  A dog with Canine Atopic Dermatitis will lick or chew the affected areas. This licking, chewing, and scratching can then result in hair loss and other severe problems. Fortunately, this condition can usually be solved with medication, by removing the allergens from your dog’s environment or by administering several courses of immunotherapy.

Legality of this Dog Breed Unfortunately, this breed is often subject to the same type of Breed Specific Legislation (BSL) that other types of dogs have been subjected. In some areas, it may be illegal to own one of these dogs or you may be subject to having to fulfill one or several conditions. For instance, in some areas of the U.S., owners are required to muzzle these dogs in public or microchip them. They may also be required to be spayed or neutered. And in other areas, you may be required to take out a special form of liability insurance just to own one.

And to confuse the issue all the more, these types of legislation are being enacted or repealed on a regular basis. As a result, it’s very important that you do your own research on the legality and liability requirements you have to meet in order to own one of these dogs. Ultimately, it’s up to you to decide if this is a dog worth owning or if you’d rather own a dog that doesn’t have such a high public profile.

Am Staffs are a dog with sort of a PR problem. Over the years, it has been placed into the pit bull category by the public and as such has been embroiled in the “Pit Bull Panic” that has swept the U.S and other parts of the world.

The simple fact of the matter is that this dog breed isn’t any more prone to aggression than any other type of dog breed. That’s because breed type is a horrible way of determining if a particular dog is going to be aggressive or not. To determine that, you have to evaluate as individuals. If they are properly socialized and trained and aren’t mistreated, then they are as good or better than any other breed of dog.

In my personal experience, I have found that that Am Staffs are some of the most loyal and friendly dogs I’ve ever had the chance to own. They really seem to excel in family environments and are incredible around children. It’s such a shame that they’ve gotten such an awful rap over the years because they really are a sensational dog breed.