The Bull Terrier is a breed of dog that absolutely demands your attention. Not just because it has an unusual egg-shaped head and triangular eyes but also because it’s a proud and confident breed that secretly has a desire to be the leader of the pack. However, if you’re looking for a dog that’s sort of rowdy and loves to be the life of the party, then you really can’t go wrong with one of these dogs. While it isn’t an APBT, it’s often placed in the same category as them by members of the public and by governmental agencies.

With proper socialization and training, these dogs can really become great members of the family. If only people would look past the prejudices and preconceptions that people have had about this animal in the past. Give it a chance and it will be a great friend and companion for you.

As is the case with other types of “bully” dogs, the Bull Terrier is a dog which was bred with only a few uses in mind. These dogs were bred to either remove vermin from farms or to be participants in a number of different animal-based blood sports that were prevalent during the 18th and early 19th centuries. One of the most popular animal blood sports of the time was bull baiting – a practice in which a bull was chained to a fence or a pole and dogs were set to attack it. During this event, the dogs would try to get under the bull’s dangerous horns to bite its legs and lower extremities, while the bull attempted to defend itself by using its horn to project the dogs out of the area or to gore them.

Around the beginning of the 19th century, there was a desire to cross the tenacity of the bulldog with the speed and dexterity of the terrier in order for the dogs to be more successful in this sport, especially since the bulls and the bears used in this sport were no longer chained down. It was this breeding that would create two distinct dog breeds – one of them being the ancestor of the modern Bull Terrier. This continued into the mid-part of the century when these dogs were then bred with a number of different dog breeds, namely English White Terriers, Spanish Pointers, and Dalmatians. A dog breeder names James Hinks wanted his dogs to be all white, so he began breeding with this intention in mind. However, this led to some serious health complications in the breed up until the early 20th century, so it had to be bred with Staffy Bulls during this time. The result is the breed that we know of today. 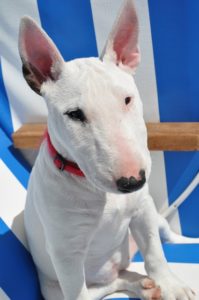 This breed of dog is one of the most recognizable and that’s all because of its distinct head shape. These dogs have a head that looks egg-shaped from the front and is almost completely flat on top. From there, its face slopes downward to the nose. Another unusual characteristic about this dog is its triangular-shaped eyes that are small and set deeply. And all of this is underpinned by jaws that are muscular and deep. The shape of its head and its eyes give it a profile that’s unlike any other dog’s profile you’ll ever come in contact with.

These dogs have well-rounded bodies with muscular shoulders and deep back ribs. They also have shoulders blades which are often described as being wide and flat and sloping down from the bottom edge to the top edge of the blade. A sturdy structure that’s placed on straight, moderately long front legs and hind legs that look parallel when viewed from behind the dog. Most of these dogs have short tails that are set-low and carried horizontally- making them look somewhat like pump handles.

While it’s probably not surprising that this breed of dog usually has a white coat, what is surprising to some people is that this dog can also come in a variety of other colors. Some of the colors that are considered standard by the American Kennel Club (AKC) to this breed of dog is black and tan, black tan and white, black brindle, red and white, red, white and brindle, white black and tan and brindle and white. Non-standard colors that are also possible include fawn, fawn smut and white, red smut, white and fawn smut and white and red smut.

Even though you wouldn’t know it by looking at them, these dogs are really prone to shedding. And I do mean shedding a lot. If not regularly brushed, the hair from this dog will end up just about anywhere and everywhere.

Two things are very important to know about Bull Terriers. One, proper socialization is absolutely crucial, even to the point where sometimes it’s better to take this dog to a socialization class when it’s a puppy than trying to tackle it on your own. And two, they must be properly trained. Failing to do these two things can lead to undesirable behavior to manifest in this dog breed such as nipping, jumping or grabbing with their teeth while playing. And while it’s being trained, it’s important that the animal is handled patiently but firmly and given plenty of positive reinforcement.

It’s also extremely important to give this breed of dog plenty of exercise and attention. If you fail to do that, then it can become destructive – chewing up shoes and furniture or doing other such destructive things. These dogs also require a strong-willed owner who is willing to take charge. After all, these dogs are strong-willed themselves and will try to establish themselves as leader of the pack if left unchallenged.

Unfortunately, there are a large number of diseases which affect this breed of dog. While this predisposition doesn’t mean that a particular dog will get a particular disease or condition, it does mean that members of this breed are susceptible with coming down with certain illnesses. Although some conditions are genetic and can’t be prevented, there’s always a case for helping your dog lead a healthy life by giving them a healthy diet, making sure they have plenty of exercise and giving them your unconditional love as they do you.

Two of the conditions this dog is susceptible to are Status Epilepticus and Compulsive Spinning. Status Epilepticus is a form of Canine epilepsy that can cause the dog to have sudden and uncontrollable seizures. This is usually a genetic disorder but it may also result from environmental factors such as poisoning. Only a vet will be able to determine the cause of this particular form of epilepsy and whether it can be treated with medication. The second condition, Compulsive Spinning, is usually a condition that can be caused by stress but can also be genetic. The main symptom of this condition is the dog chasing its tail compulsively and not being able to stop.

Another condition that potential owners of this breed should know is that these dogs are sometimes born deaf or partially deaf. That’s why it’s important to have your dog thoroughly checked out by a veterinarian because it’s difficult to determine deafness, especially in young puppies. 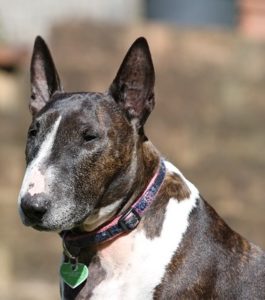 Since this dog breed is often placed in the same category as American Pit Bull Terriers, it’s important to make sure that this breed is legal in your area. Some areas have created laws banning or restricting the ownership of these dogs. Also be advised that some insurance companies also have a problem with this particular dog breed and may drop home owner’s policies when they get this breed of dog.

If you are looking for a dog that’s sweet-tempered and rowdy, all at the same time, then you might want to take a good look at the Bull Terrier. These dogs are great for active families who have the time to give to this marvelous animal. While they have been known to exhibit some hostility to other dogs, especially to member’s of their own gender, they tend to be well-behaved dogs. They are also confident and if given the chance will undermine the authority of weak-willed owners. It’s definitely a dog that requires patience and a strong, steady hand.