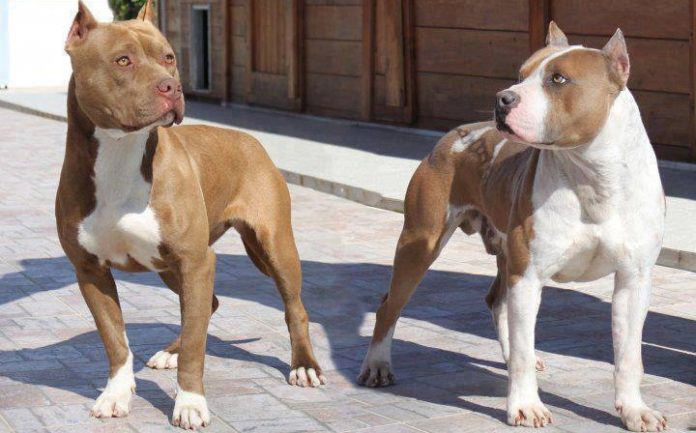 The Pit Bull is a purpose-bred dog. Historically, Pit Bulls were bred as a hunting dog of large game. Later, the Pit Bull served as a farm dog and butcher’s tool for taking down bulls for slaughter. Later still, the dog was bred to fight other dogs for money and entertainment. This purpose-breeding has given the Pit Bull behavior attributes that may not be desirable to all prospective owners.

The Pit Bull is strong, intelligent, and has been bred for a willingness to “test their mettle” against larger animals and other dogs.
It is not uncommon for Pit Bulls to not get along with other dogs; especially dogs of the same sex and dogs that are not neutered or spayed. This by far is not always the case with this breed, but the predisposition for varying levels of dog-aggressive behavior is very much there. It is important for the potential owner of a Pit Bull to be realistic with their expectations of their new dog, and to be prepared to have a wonderful family dog that may not be able to socialize with other dogs. This is especially true of someone that is adopting or buying a puppy.

A benefit to adopting a young adult or full grown Pit Bull is that their behavior is more fixed and reliable. Contrary to what many well-intentioned but incorrectly informed new owners think, a Pit Bull’s behavior is not influenced only by how you raise them.

Is it “how you raise them?”

Puppies from the same litter that receive the same love and socialization will range from being completely non dog-aggressive even when provoked or attacked, to dogs that will go out of their way to start a fight with any dog if not restrained. Dog aggression is common with all terriers. It is a trait also held by the Rottweiler, Akita, Malamute, and Doberman.

The Pit Bull does not fully mature until over two years of age. Due to this late maturity, some Pit Bulls that were dog-friendly as puppies will begin to show intolerance of unfamiliar dogs as they get older. This does not mean that the dog cannot play with other dogs, but it may mean that the Pit Bull should stick to dog playmates that it already knows.

In some cases, Pit Bulls that were friendly with other dogs when younger will be unable to be with any dogs later in life. This is not common, but it is something that every responsible Pit Bull owner must consider. Having a Pit Bull neutered or spayed around 6 months of age can greatly reduce the chances of intolerance occurring later in its life.

Although many Pit Bulls get along well with other dogs, it is dangerous to expect all Pit Bulls to do so in all situations. A Pit Bull that is very dog-friendly may seriously injure or kill another dog if a fight is started. Because of this, the best way to keep dogs safe while they play is to take steps to decrease the chances of a fight starting.

It is always a good idea to introduce any dog to a new dog slowly, and on leash. Many people feel that it is best to pick a neutral ground, like a back yard of a house where neither of the dogs live. It is wise to first eliminate things like food bowls and toys that can trigger a fight.

First offering two of the same toy, such as two tennis balls, may reduce possible tension during play. Pit Bulls can play very well with dogs of all breeds and sizes, but it is important to supervise all playtime. Through supervision, the owners can step in if play is too rough or if tension arises, avoiding a possible fight.

It is vital that Pit Bulls be supervised when with other dogs. This is even true for dogs that have grown up together or get along perfectly. After a serious fight, relations between the dogs may never be the same, increasing tension and the chance for more fighting.

If a fight does happen, a Pit Bull can inflict serious damage to another dog very quickly. If a Pit Bull is left at home with another dog, the dogs need to be separated.

Although not always the case, dogs tend to be more relaxed and less prone to aggression when interacting with a dog of the opposite sex. This is a good thing to keep in mind when considering bringing a new dog into a household that already has a family dog.

Having a multi-dog household 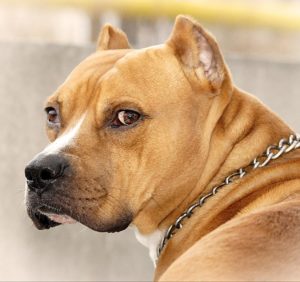 Many people have great success in having a Pit Bull in a multiple-dog household. Some Pit Bulls will not tolerate other dogs, but more often Pit Bulls enjoy having canine family members. Some people believe that the easiest way to ensure success with having more than one dog in a household is to get them as puppies and raise them together.
This method can work, but it is not always successful. Due to the varying degrees of intolerance for dogs that can be acquired genetically, raising puppies together is not a guarantee for compatibility. Many dogs end up in shelters due to intolerance towards the other family dog as they mature.

A risk must be assessed when brining a Pit Bull puppy home into a house with other dogs, or brining two puppies home together. An owner needs to understand that they may have a situation as the Pit Bull matures where the dogs cannot be together safely. This usually is not the case, however being unprepared for this possibility is not fair to the dogs involved.

When bringing home a Pit Bull puppy, the new owner needs to assume responsibility for the breeds predisposed behavior and make a commitment to keep it safe and happy for its entire life no matter what may arise.

Having puppies of separate sexes, and having them altered before full maturity may decrease some of the chances for aggressive behavior. Making efforts to keep tension and fighting from starting is very important. Feed the dogs separately, even if they seem to share a food bowl without problems.

Be cautious when offering raw meat, bones, and special treats. A good idea is to have the dogs separated at feeding time. While some people resist this idea, it’s better to be safe than sorry.

Having duplicates of favorite toys can help eliminate the dogs feeling the need to guard from each other. Interacting with the dogs equally can help keep them from feeling a need to compete for attention.

Activities such as going for walks together, playing ball in the yard, going to the river for a swim, or lying on the couch side by side for petting during a movie are ways to enjoy the dogs together and thus strengthen the bond with the dogs and with the owners.

Socialization while the dogs are young is important as well. Exposing puppies to a variety of situations together in a positive way will help them be confident dogs as they grow up. Dogs that are feeling fearful or insecure are more likely to act aggressively towards each other or other dogs.

Many Pit Bull owners have found success in bringing older Pit Bulls into a home that already has a dog (either Pit Bull or other breed). By doing this the new owner has a general idea of the new Pit Bull’s behavior with other dogs, and knows the behavior of their first dog, as well. There are many success stories from people that adopt through a rescue or animal shelter that have used this method.

Another idea to keep in mind when considering adding another dog to the family is foster care. Many rescues and shelters are in great need of foster families for dogs.

This allows a family the chance to get used to having more dogs, gives time for the existing dog to adjust to having a canine family member, and may help the decision on which dog to adopt or if the family is ready to adopt another dog.

The greatest benefit to fostering is that a life is being saved. Fostered dogs are no longer in the shelter risking euthanasia, and once a dog is in a foster home, another dog can have the chance for a foster family.

Having multiple dogs, taking your Pit Bull around other dogs, introducing new dogs to your dog, should all be handled with caution. Not because your dog is “bad.” You as a responsible owner should know that the genetics of your breed lean toward dog on dog aggression. Keeping your dog and those dogs around your dog safe is your responsibility.